The English constitution is thus far unwritten. However, an early document of rights was the Magna Carta. While English King Richard the Lionhearted was gallivanting around continental Europe and crusading in the Middle East, his brother Prince (then King) John (of Robinhood fame) was oppressing the peasants, and even worse for him, the nobility. The nobility rebelled and forced Prince John to sign the Magna Carta, which is the closest thing there is to a written English constitution, except it’s not. 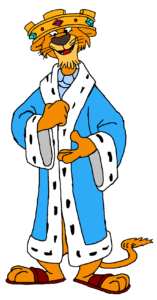 Nevertheless, the Magna Carta is a fine example for this activity, because it’s the closest thing to an easy medieval document, except it’s not. However, it shares several common traits of old digitalized documents.

This being an English document, let’s start this adventure at the British Library’s Magna Carta web page.

If you are clever, you can grab a copy of a photograph of the Magna Carta from that site. I have done so here: 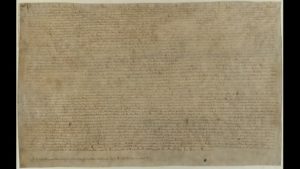 What can you determine from this photo? What can’t you determine? Here is a link to the original. Does that help much? Fortunately, the library provides a magnifier on its page: 1215 Magna Carta. Can you recognize the characters? Can you identify and understand the words?

Fortunately, that site had another photograph of a different version of the Magna Carta. Different version? Yes, although the original Magna Carta was issued in 1215, a 1216, 1217 and 1225 versions were issued. Fortunately, the 1225 version is more readable. Look at it for yourself (use the magnifier): 1225 Magna Carta. Can you recognize the characters? Can you identify and understand the words now? Perhaps only if you know Latin. Such is the case with many ancient documents. Scanning and digitizing them is often not enough by itself.

Try going through this process with another famous document from pre-industrial times.