Formation and Endurance of Life

Recall that due to expansion, the universe has become much cooler and darker over time. In fact, the typical temperature of the space between stars is nearly absolute zero. We have learned that heat energy tends to flow from warmer places to cooler places, as systems attempt to move towards thermal equilibrium (that is, until their temperatures are the same). Space is much cooler than stars, so energy tends to flow from within stars out into space. This is why we see stars shine.[1]

Planets are typically much cooler than stars. In fact, the temperature of a geologically dead, barren rocky planet would be about the same as space, that is nearly absolute zero. Shaded areas of moons and planets that lack atmospheres quickly drop to near zero. The side of the planet Mercury that faces away from the sun is such an example.

Yet planets orbiting around a star receive a significant continuing dose of energy in the form of light emitted from that star that then warms up the planet. The planet then becomes warmer than space, and so then the planet must start shedding energy into space. For example, the Earth receives significant amounts of sunlight that warms the earth. The Earth must then shed some of the energy into to attempt to move towards thermal equilibrium with space.[2]

Recall the heat engine example. A heat engine bridges a temperature difference. Heat flows across that difference through the heat engine. Some of that heat energy is converted to work while the rest is exhausted as waste heat. Entropy is produced while the engine continues to function.

The motion of atoms and small molecules in a liquid or gas is nearly random. The statistics of these particles is known as statistical mechanics, or more traditionally, thermodynamics. The formation of life from this random motion involves several steps. 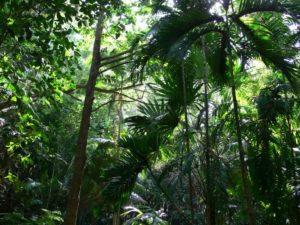 Once these steps have occurred, life has developed. One can view life as the residue of random action subjected to the principle of fast entropy.

The Earth’s surface reflects some sunlight into space. Reflected light results in little entropy.
However, plants absorb much of that sunlight that would otherwise maintain its high level energy by being reflected into space.
Plants store some of that energy in the form of biomass. Animals have evolved to consume biomass.

Life As A Faster Path

Life itself can be viewed as the process of heat engines begetting heat engines. Bacteria are an easy example.
Hence, life represents a mechanism to maximize the rate of entropy production. Therefore, life is not due to pure luck; rather, the formation and evolution of life is favored under the e th Law.
Intelligence allows life to produce entropy even faster; thus the formation of increasingly powerful brains and intelligence are favored.

[1]That humans should have developed eyes that are particularly sensitive to the peak wavelengths emitted from the star our planet orbits should not be surprising.

[2]As long as the sun shines upon the Earth, the Earth will not reach thermal equilibrium with space. This continuing energy flow between the sun and the Earth maintains a continuing potential.

[3]I. Prigogine has proposed that dissipative structures can appear that increase entropy production. In his terminology, living organisms can be viewed as dissipative structures. Astrobiologist J. Lunine has paraphrased Prigogine’ s finding as follows: “complicated systems that are held away from equilibrium and have access to sufficiently large amounts of free energy exhibit self-organizing, self-complexifying properties.” (J. Lunine, Astrobiology, A Multidisciplinary Approach. Peason Addision Wesley, 2005).