Gaming as a Form of Simulation

Students will learn how games can be used as a form of historical simulation for both exploration and educational purposes. Students will examine how the need to make games marketable induces certain biases and misrepresentations that impact their historical accuracy.

Animations are one form of simulation. Animations are a series of artificially-created graphic images that are played in rapid succession to produce the illusion of change. Animations can be recordings of manually drawn and manipulated images. Or they can be graphic objects manipulated by a computer program.

Animations can involve maps that show the change or borders, or the movement of people. They can show environmental or social change, such as the spread of urbanization.

A simple form of animation is an animated GIF, which is a series of several digital images bound together in a GIF file. A more complicated form is Flash, a proprietary format. CSS also supports some animation, as does Java. Animations often involve plugins, such as Flash, to display on web pages.

Videos can show an entire simulation or snippets. Video clips are sometimes used in games, and are often a good way for secondary storyboarding of a game. Some videos can now be filed in 3D to provide an interactive exploration experience.

Videos are a series of still images that are shown in rapid succession to present the illusion of movement. Videos can include actual photography (movies) and animations. Videos are different than animations that are produced on the fly by software, just as cinema is different from live theatrical performances. However, if generated animations or theistical performances are recorded, then the recording might be a video.

Videos are very useful to demonstrate changing graphical images or for portraying interviews. They are also better for mind control and emotional manipulation, because the movie maker controls the timing of what is seen.

Video to display on computers comes in two major categories of formats. One category is produced by proprietary software and required such to be viewed, such as the.cmprojfile produced by Camtasia. Another category are standard formats to be viewed by a broad range of browsers, software and devices, such as .mp4 or .webm. Often you may produce the initial video in a proprietary format, then export it into standard formats.

Video is typically captured by a camera digitally or via film and then processed. (Some equipment can play original video recordings). You may yourself view videos in their raw form, but you will almost always want to edit and process them to show to others. Editing software such as Adobe Premier, Apple iMovie, or Camtasia, can edit video and output it in various forms. You may also wish to re-process the video for streaming over the web.

Most games involve gamification attributes. For example, many games involve action with a focus on fights and battles. Players can earn points, property and special capabilities, hence providing a sense of accomplishment and “income” for effort performed. Many games allow for competition with other players and group recognition for success.

Below is a screen shot from a very simple historical computer game. The player rules a dynasty, and can invest, add to reserves, build up the military or engage in conquest. Though simple, it contains several important gaming attributes. First, is that the player is empowered o make important choices. Second is that their is a “reward” for smart actions, in this case being the rewards of investment or successful conquest and dynastic longevity. Finally, there is an underlying element of chance, so that the outcome of decisions is not entirely predictable. 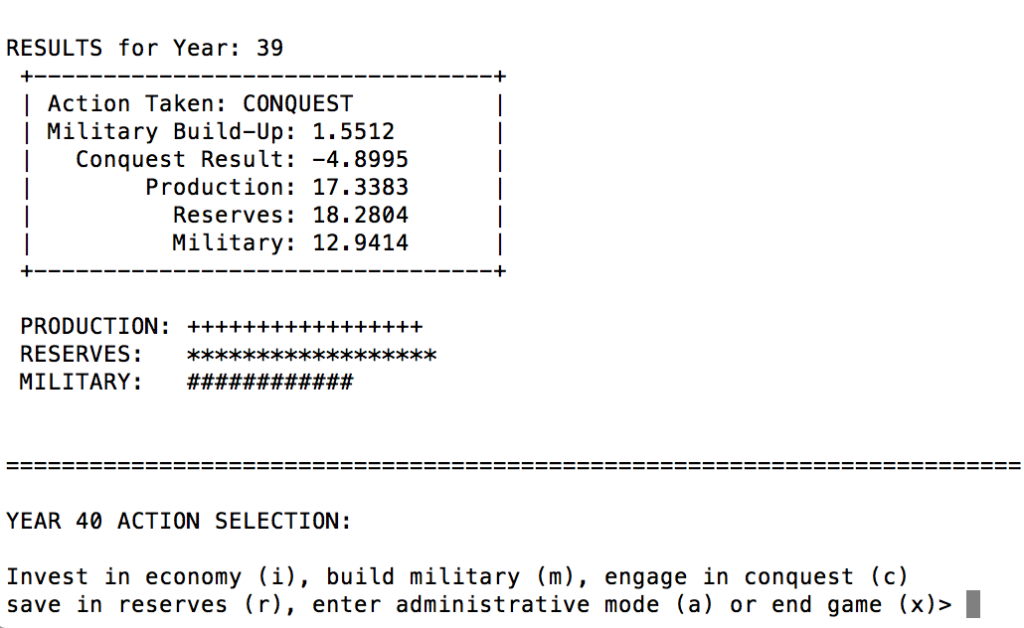 A screenshot from a simple historical computer game

People generally play games for their entertainment value. However, generally, games are not reviewed by historical experts for authenticity. Even when they are, the games may nevertheless still contain distortions of historical facts and processes. As a historian, it is important to realize that history may not progress in the same manner as such games simulate.